For basketball fans all over the world, springtime in the United States means one thing and one thing only: March Madness. Teams from across the country play their hearts out to win the culmination of the National College Athletics Association’s (NCAA) regulated basketball season. Many diehard fans travel to away games to cheer on their favorite team. But will they be welcomed as friendly rivals – or will the home team’s fans feel less-than-friendly toward the opposing team’s supporters? We wanted to find out.

Using sentiment analysis, we scraped Twitter data from specific basketball game days to determine which teams – and which fans – were making the most noise on social media. During sentiment analysis, a score between negative one and positive one is assigned to each tweet. A score between zero and one is considered positive and a score between zero and negative one is considered negative. Which teams earned the most positive tweet support? Which teams caught the most shade from amateur online commentators? How do fans react when their March Madness favorites win big or go home hard? Read on to find out more. 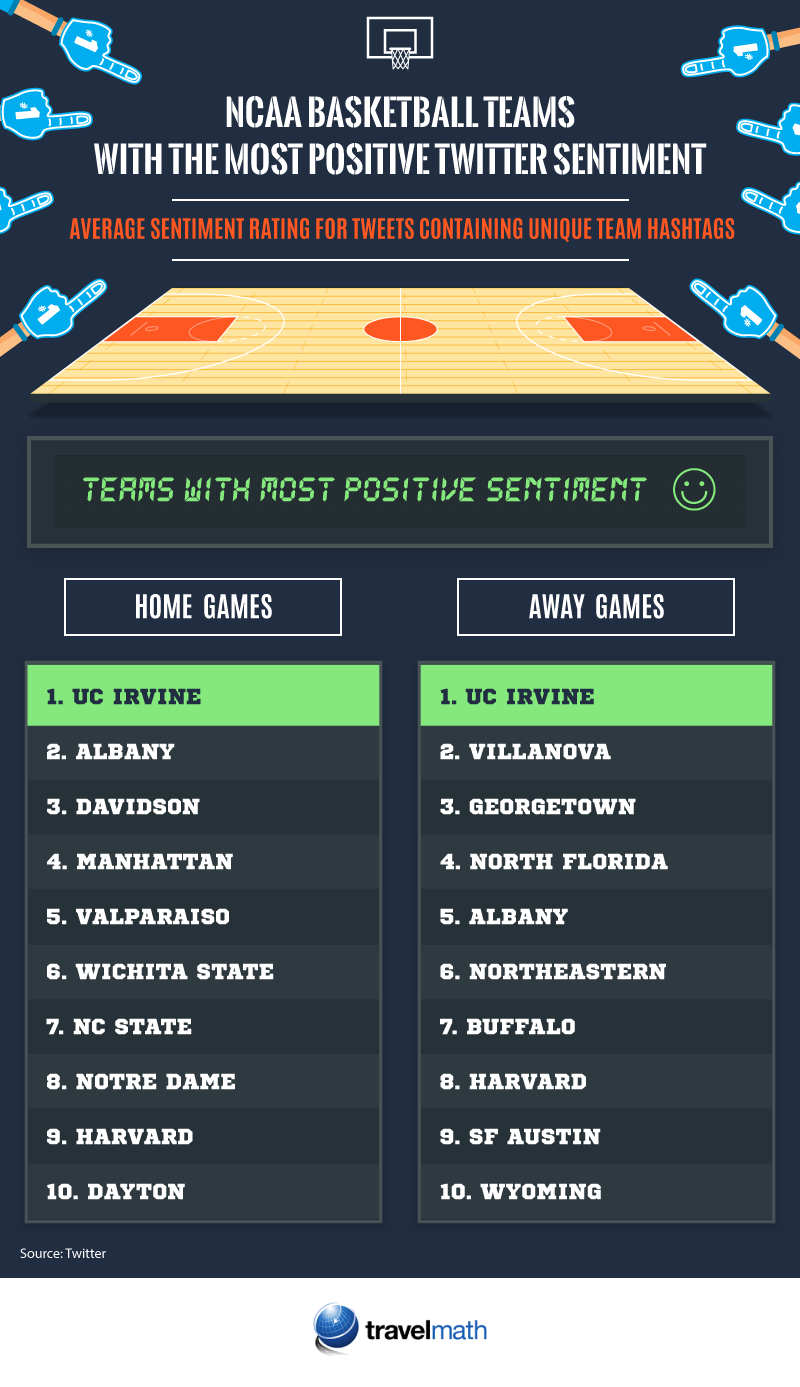 When it comes to positivity, teams across every national conference feel the love from fans. UC Irvine tops the charts for positive tweets at both home and away games. Five of the top 10 teams earning positive social media support play in Atlantic conferences, with Davidson and Dayton in the Atlantic 10 (A10), Manhattan in the Metro Atlantic Athletic Conference (MAAC), and North Carolina State and Notre Dame in the Atlantic Coast conference.

Teams at away games earn even greater positive support than teams that play at home. The top three schools earning positive tweets at away games are UC Irvine with a ranking of 0.6709, Villanova with 0.6448, and Georgetown with 0.6058. All these rank higher than UC Irvine’s home game positivity score of 0.5900. When teams play at schools other than their home courts, it must be nice to feel that support from the long-distance fan base.

Travelmath Stat: If UC Irvine makes the Final Four, fans will have to travel 1,347 miles to cheer on the team in Houston. 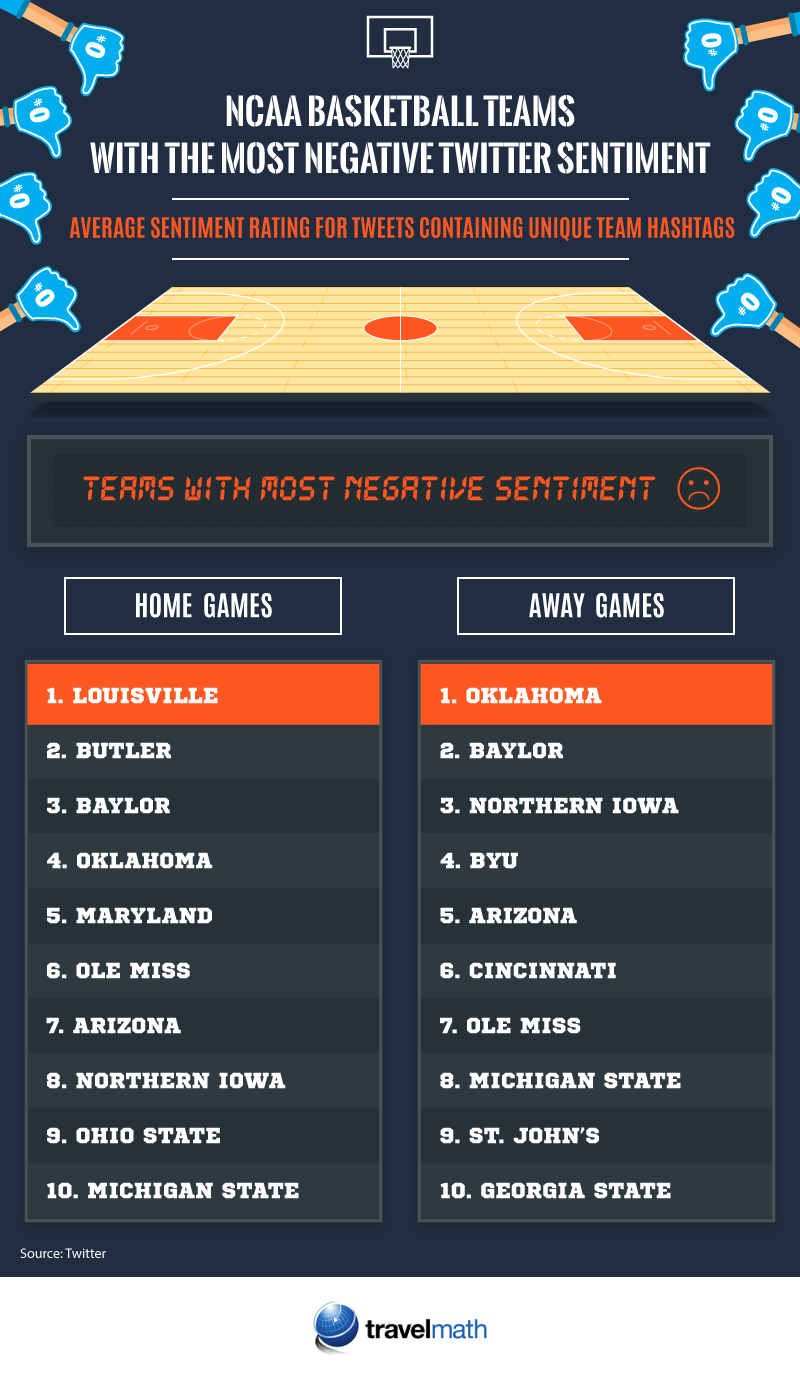 Compared to the top 10 teams receiving positive support, there is no overlap with teams that receive the most tweets expressing negative sentiment. On the top 10 lists for teams receiving negative tweets both at home and away, we see lots of schools competing in the Big Ten, Big 12, and Pac-12 conferences. For fans of March Madness, these are by far some of the most recognizable and most promising basketball teams competing in the NCAA.

Three of the top 20 teams receiving negative comments are in the Big Ten: Maryland, Ohio State, and Michigan State. Baylor, Oklahoma, and Northern Iowa are all competitors in the Big 12 Conference.

Travelmath Stat: If the University of Oklahoma makes the Final Four, fans will have to travel 436 miles to cheer on the team in Houston. 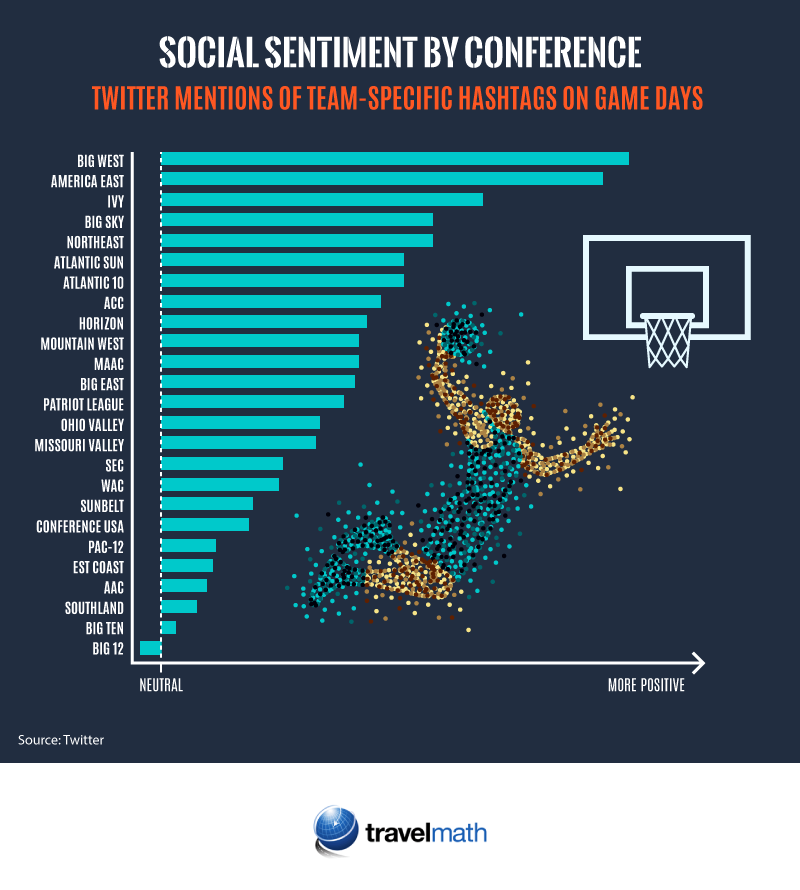 The Big West conference has the highest average sentiment score of all the NCAA conferences, with a ranking of about 0.60. This could have a lot to do with UC Irvine’s top position as the No. 1 “scorer” for positive feedback at both home and away games, since the school does play in the Big West conference during NCAA season play. America East and the Ivy League trail behind the Big West conference, demonstrating that you don’t have to be a top-seed school in a famous conference to earn a dedicated, supportive fan base. 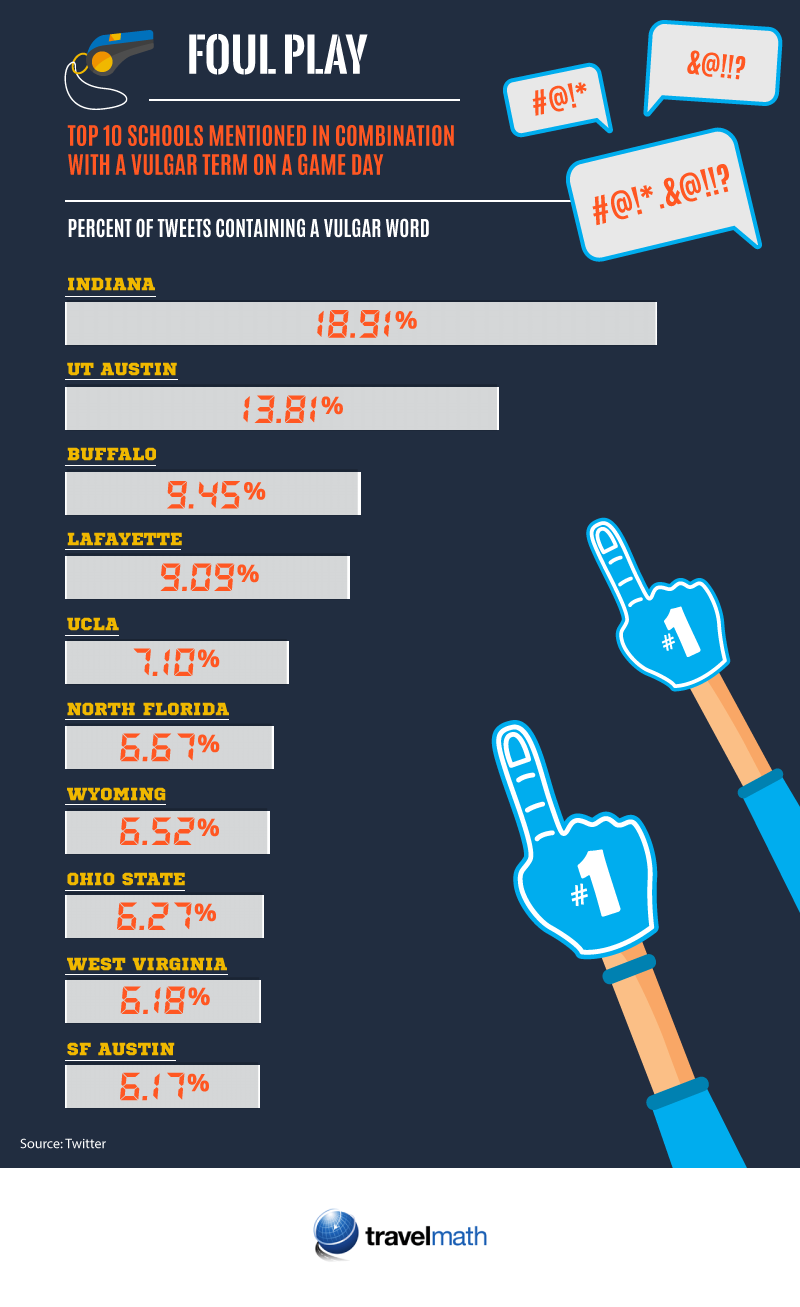 All athletes know there are penalties for being foul-mouthed or provocative on the court, but fans don’t always play by the same rules. The use of vulgarity or profanity in team support can sometimes be symbolic of historic rivalry – or even a marker of hardcore competition. It is always hard to tell whether vulgar terms are being tweeted by supporters or detractors, which may be more a sign of the language of our times than a measure of basketball fandom.

Travelmath Stat: If Indiana University makes the Final Four, fans will have to travel 827 miles to cheer on the team in Houston. 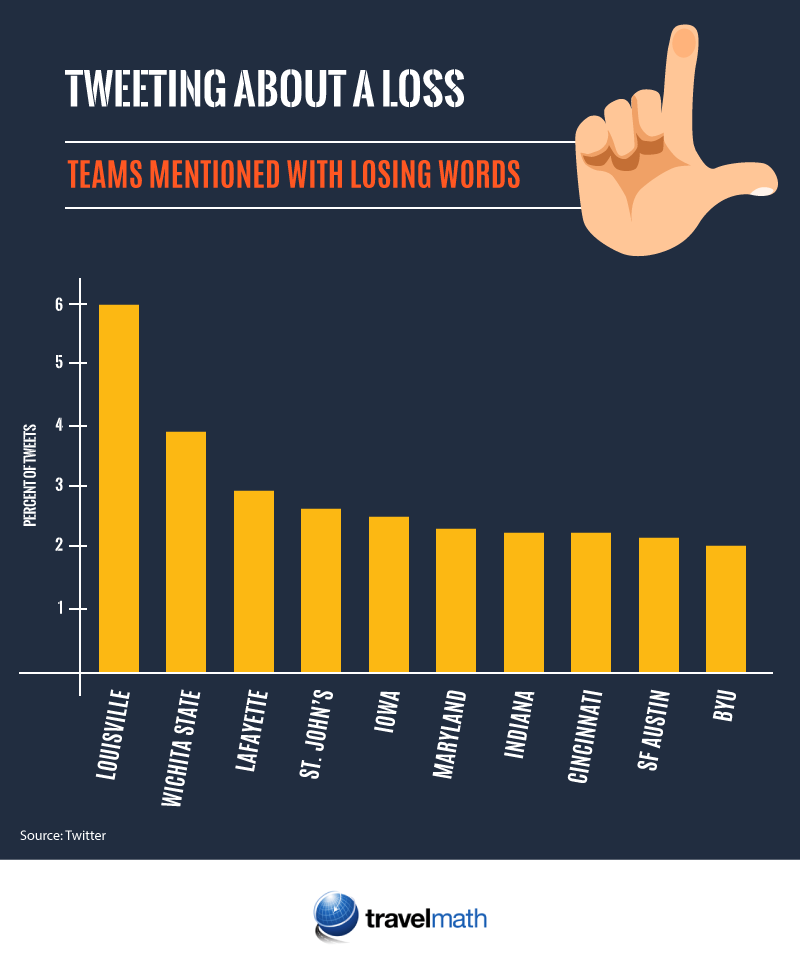 When they’re cheering for losing teams, tweeting fans still like to update their friends as games progress. Sharing the agony that comes with a devastating loss on the court is all part of being a fan. Of all the tweets related to Louisville, about 6% mentioned loss or losing. That could have something to do with the self-imposed postseason ban the team is undergoing after an escort scandal that broke recently. In second place for “losing” tweets is Wichita State, followed by Lafayette.

Travelmath Stat: If Louisville makes the Final Four, fans will have to travel 809 miles to cheer on the team in Houston. 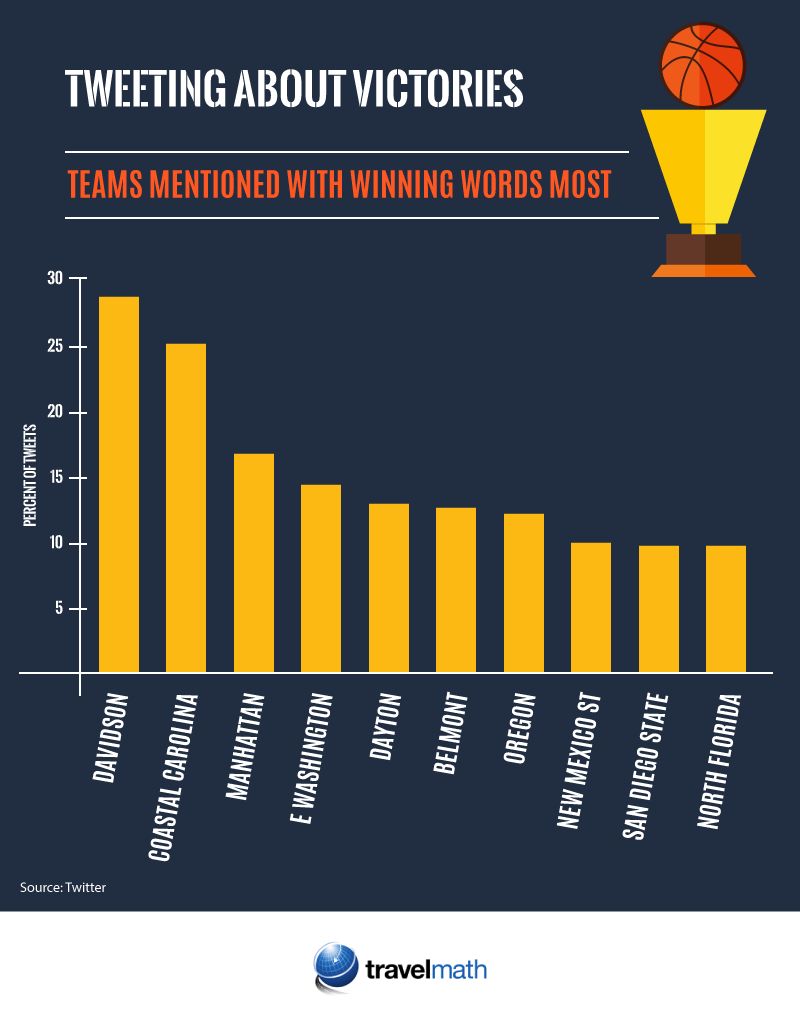 Of course, cheering for a winning team means tweeting the good news – and there’s nothing like the bragging rights that come with a March Madness win. When it comes to victorious sentiments in tweets, Davidson, Coastal Carolina, and Manhattan take first, second, and third place respectively for the teams mentioned with the most winning words. Davidson takes the No. 1 spot – nearly 30% of tweets included mentions of winning. Coastal Carolina clocked in with approximately 25% winning tweets, and the rest range between about 11% and 16%.

Travelmath Stat: If Davidson makes the Final Four, fans will have to travel 938 miles to cheer on the team in Houston.

Get in the Action

March Madness is the highlight of the year for many basketball fans, and for the NCAA, it hosts some of the season’s ultimate gameplay. In the digital age, fans have been known to take to social media in order to cheer on their favorite teams and rile up their rivals. Twitter users have demonstrated that fans don’t necessarily care how big the school is, how high the team’s seed, or how famous the players are. Positivity and negativity all come out on social media in much the same way fans express themselves in the bleachers, no matter what reason fans have for supporting their favorite team. And thanks to the support of dedicated fans, the frustration of loss and the celebration of victory are all expressed on the Internet as well in front of TVs across America.

Want to hit some away games to cheer on your favorite team? Head to Travelmath for everything you need to map your route. Whether you’re flying or driving, we have tools that let you calculate the distance you’ll travel and the time it will take – and even a handy travel cost calculator to keep your budget in check.

We scraped Twitter for hashtags unique to each university in the study. Universities that made the 2015 NCAA Men's Basketball Tournament were selected for this study. Using timestamp data, we limited the results to days that games were played.

Sentiment of the tweets was determined by using AlchemyAPI. We fed the tweets’ text into the API and received a numerical score from -1 to +1 for each, with -1 being most negative and +1 most positive.

The keywords that were used for each university can be found here.

A combination of 13 vulgar and curse words were used to determine the percent of each university’s tweets that contained a vulgar term.