Whether you live in a city or you’re just visiting, catching a ride on public transportation can quickly become part of your daily routine – and for good reason. Transit systems such as subways and trains are a convenient and cost-effective way to travel, plus they reduce our carbon footprint. But before you grab the pole or steady yourself with the strap, ask yourself one question: How many germs are traveling on the subway or train with you?

We sent a team to gather bacteria samples from the handles on public transit systems in five major cities: New York City, Washington, D.C., Chicago, Boston, and San Francisco. Overall, surprisingly few germs lurked on these surfaces, with one major exception: the subway in New York City. Read on for the full results of our study, advice on avoiding germs on public transit, and more.

To determine how many germs are riding each city’s transit system, we tested samples to check bacteria levels based on colony-forming units (CFU), which refers to the number of viable bacteria cells. The New York City subway samples revealed a shocking average of 2 million CFU per square inch. On the other end of the spectrum was the subway in Boston, with a sample that turned up a scant average of about 10 CFU per square inch.

Bay Area Rapid Transit (BART) in San Francisco was the second germiest, with 483 CFU per square inch; the Chicago “L” train was third with 180; and the Washington, D.C. Metro turned up only 30.

The average for every city’s transit system was about 400,000 CFU per square inch, though excluding the bacteria-ridden New York subway dropped the average to 176 CFU. What’s the reason behind the New York City subway’s staggering bacteria numbers? Though every public transit system we examined serves millions of travelers per year, the NYC subway transports more than three times as many travelers as the other four transit systems combined. But before you swear off the subway, keep in mind one thing: Not all bacteria are bad. Several types are harmless or even beneficial. 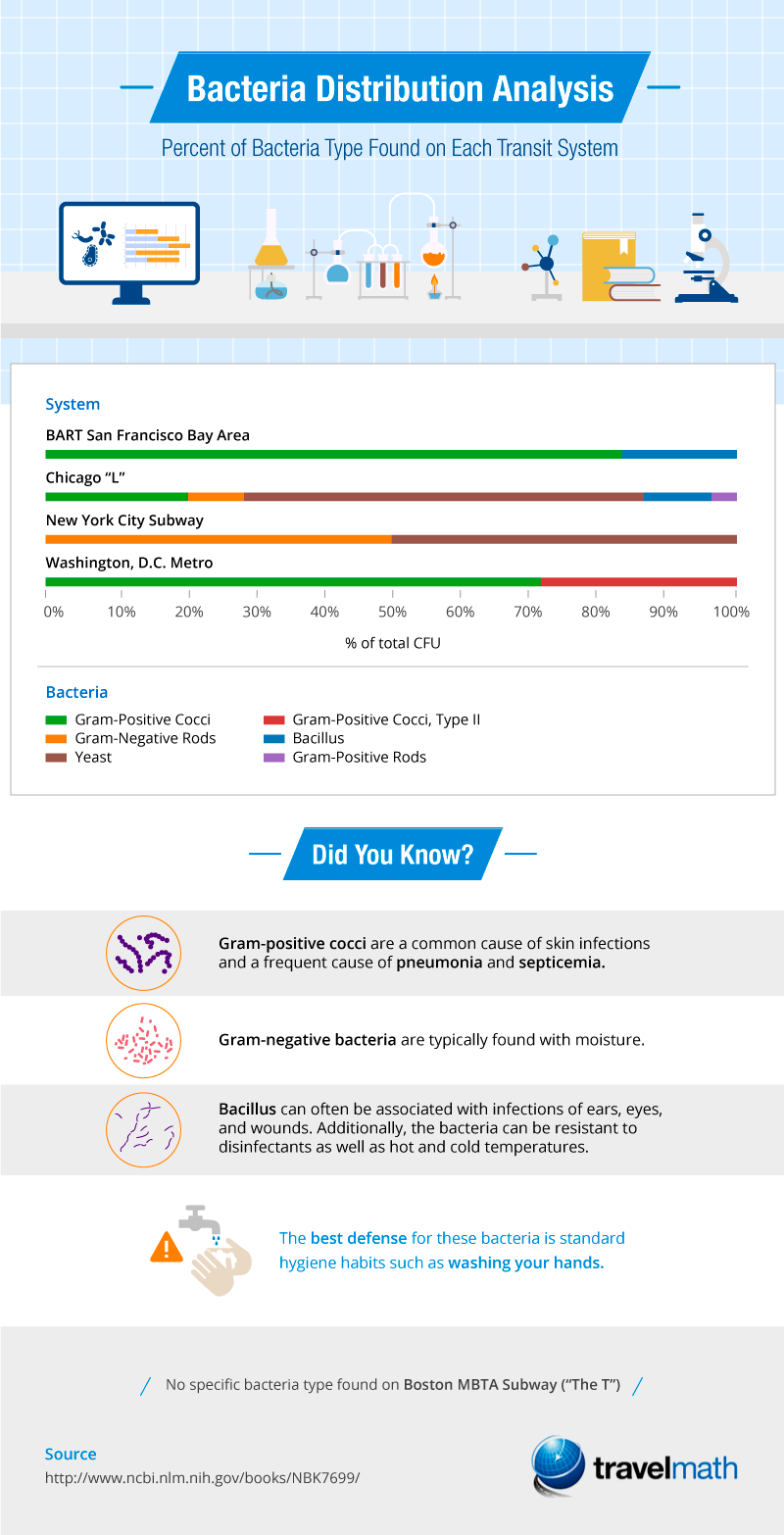 Next, we dug deeper to break down the bacteria we found by type: Bacillus, yeast, and various gram-positive and gram-negative strains. The subway in New York contained an even split of gram-negative rods (which can cause respiratory and other infections) and yeast (types of which commonly live on skin and rarely cause infection).

The “L” train in Chicago was home to the most varied bacteria types, the brunt of which were yeast. BART in San Francisco and the Metro in Washington, D.C. both predominantly hosted gram-positive cocci, which are a common cause of skin infections. The Metro was also the only location that yielded type II gram-positive cocci, and only BART and the L-train contained Bacillus (which can cause a range of infections, including respiratory illnesses). Our samples from the Boston subway, home to the fewest bacteria, didn’t reveal any specific types.

Our study revealed that, aside from the New York subway, public transit may not be teeming with as much bacteria as you may think. However, specific surfaces within every vehicle may vary, and it never hurts to play it safe. If you’re taking public transit, you can safeguard against germs in a few simple steps: Avoid touching surfaces if you can help it, keep your hands away from your face and out of your pockets to avoid spreading germs, and wash your hands as soon as you arrive at your destination.

EmLab P&K performed all laboratory testing. The numbers presented are an average of all like samples taken. Handrails were swabbed on public transit trains in five major cities. Three trains in each city were sampled.