The universe is a big place – being faster than a speeding bullet is a crawling pace when it comes to interplanetary travel. Science fiction authors have needed to bend the laws of physics to create engines that are capable of going faster than light in order to complete these journeys in any reasonable amount of time. For this reason, there are a handful of superheroes who can travel faster than light, and in some cases, back in time.

See how your favorite superheroes and ships stacked up below, and read our methodology at the end to learn more about the science behind these fictional travel times.

Iron Man vs. The Batmobile

When it comes to mechanical ingenuity, Bruce Wayne is no match for the technological savant Tony Stark.

Firefly’s Serenity is the fastest ship that seems to obey the laws of physics; however, this makes it ill-suited for traveling between star systems. Even Star Trek’s Enterprise NX-01 is a little sluggish at less than five times the speed of light.

The fastest hunk of junk in the galaxy has speed where it counts. Intergalactic travel includes immensely far distances, and through heavy modifications to the Millennium Falcon’s hyperdrive system, these kinds of trips are technically feasible.

New York to LA: How Quick Can They Get There? 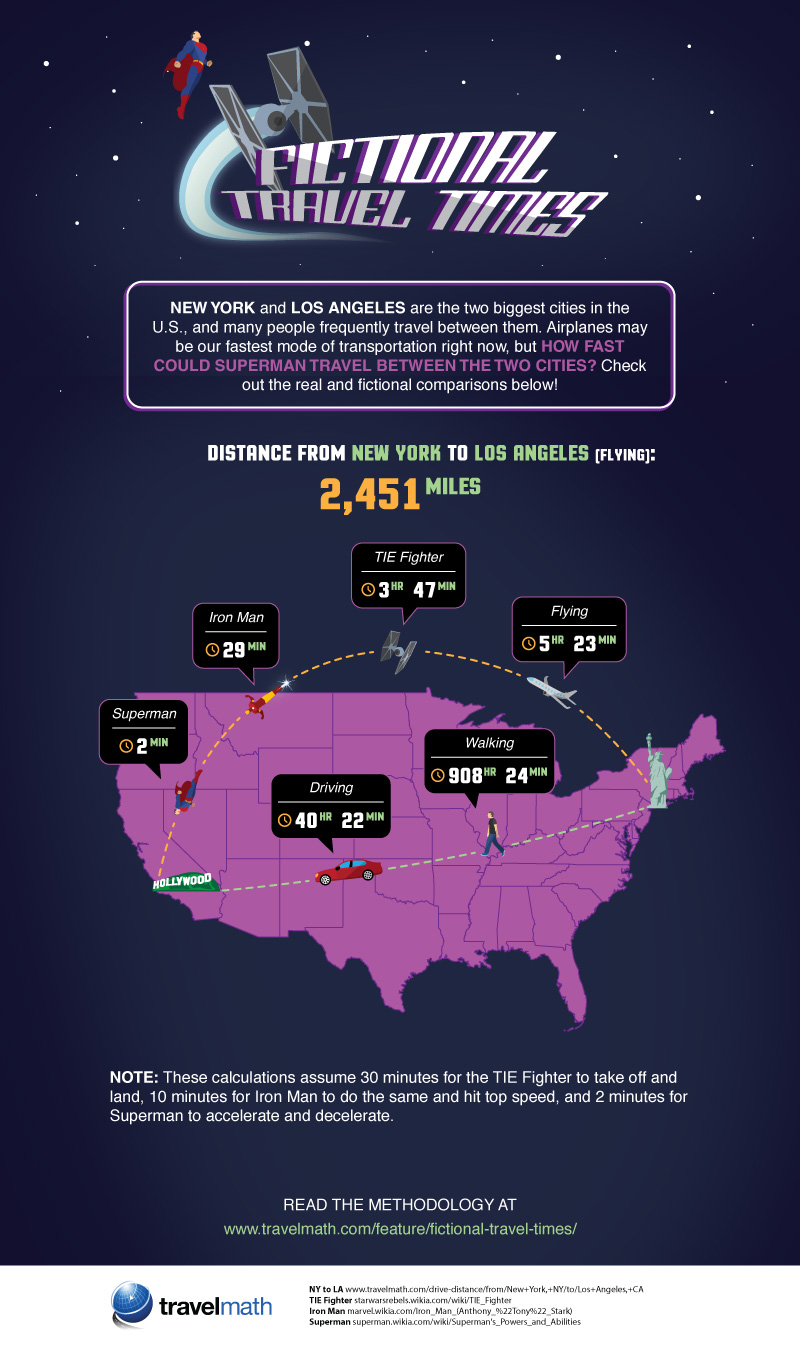 Customize Your Own Route

Calculate the travel time between any two cities with this tool! Your next step is to just ask Tony Stark for a spare suit to wear.

The majority of superhero and ship speeds came directly from our research; however, we did need to calculate some of the travel times ourselves. Foremost, we assumed that each character or ship would be traveling at their fastest speed for the entire length of the journey and that they would have life support systems to survive the rigors of space.

The Human Torch is able to travel at supersonic speeds, but quantifying this relied on a specific example. In one comic book series, he claims to be able to easily outrun hunter-seeker missiles. A close comparison might be the AIM-9 Sidewinder heat-seeking, air-to-air missiles used by the U.S. Navy. These missiles have a top speed of mach 2.5 (2.5 times the speed of sound) so it seems safe to assume that the Human Torch can travel up to mach 3, or 2,283 mph.

The Galactica Battlestar was pushed to its limits on the pilot episode "33" when the survivors of the Cylon attack had to make a FTL jump every 33 minutes to outrun the Cylon army. The range of the ship is estimated at up to 30 light-years; however, since the military ship was protecting the surviving civilians, we estimated that the range was 5 light-year jumps every 33 minutes. The FTL engine needs to cool down between each jump, but on average, this equates to 53.4 trillion mph.

There is much contention over the speed of Superman vs. Goku, and for the sake of simplicity, both were set to the speed of light at 678 million mph since they are both purported to travel faster than light. The same can be said for Sonic.

The Millennium Falcon was calculated at 6.13 quadrillion mph via our source, and we used this as the basis for the X-Wing and Death Star. While the relationship between hyperdrive classes is not linear, we took this stance due to a lack of information allowing us to calculate more precisely.

Feel free to use any of the images found on this page, however, we request that you link to this page and attribute Travelmath so that your users may have access to all the assets and information available.